I know, I know...I already published this recipe almost three years ago. I was just at my family reunion this past weekend, though, and I updated the recipe based on the awesome family recipe book that my cousin Candy put together for us. This recipe is listed as one of my cousin Laura Haberl's favorites (thanks for including it, Laura!). Since I didn't get to the gobs that one of my amazing relatives brought to the family reunion before my other hungry relatives did (collective sigh of pity for me..."awww"), I couldn't resist making them this week. So, that means I also have photos of the gobs now to show how they're supposed to look. Enjoy!

Gobs are a tradition in western Pennsylvania. My mom and I were recently discussing the cultural origins of the gob, and neither of us could think of the appropriate country from which these divine desserts come. This discussion lead me, of course, to my favorite place to search for answers...Google.

Apparently the closest "city" to my hometown, Johnstown, Pennsylvania, currently has its own website to attract tourists (who knew? If you're interested, check out http://www.visitjohnstownpa.com/). According to Susan Kalcik, a folklorist and archivist with the Southwestern Pennsylvania Heritage Preservation Commission (again, who knew?), the gob's origin can be traced to medieval Germany. Gobs were most likely brought to America by various German groups such as the Amish or the German Brethren. After arriving in the states, they probably became popular in western PA due to their ability to travel well in lunch bags into coal mines or steel mills. Ms. Kalcik believes that gobs received their name from the term coalminers used for lumps of coal refuse ("gob piles").

No matter what their origin, gobs are a special treat for those visiting areas of Pennsylvania heavily settled by early Germans. I've recently begun using dark cocoa in many of my recipes, and I enjoyed this recipe with half dark and half regular cocoa. 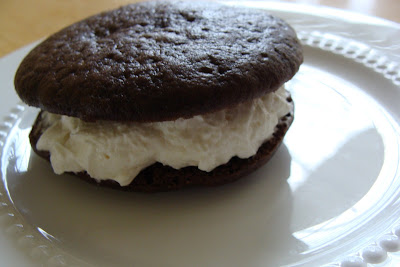 Cream together the sugar, shortening, and eggs. Add the flour, baking powder, and cocoa to the creamed mixture and blend well, about 1 minute. Add the boiling water and the baking soda to the sour milk, and add to previous mixture while beating constantly until well mixed. Drop by tablespoon on ungreased cookie sheet, about 2 inches apart. Bake at 375 degrees for about 6 minutes. Cool before icing.

Cook flour and milk together over low heat. Stir continuously until thick like paste (should be the same consistency as toothpaste or mashed potatoes...thick!). Remove from heat and cool. Cream together the margarine, shortening, vanilla, and salt with flour mixture. Beat in the powdered sugar and continue beating until smooth and fluffy (about 3 to 4 minutes).

Put icing between gob cakes and wrap with waxed paper or plastic wrap (or both, if you run out of waxed paper like I did). 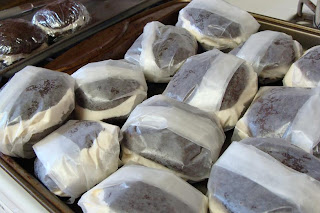 Dude, where'd you get the cake recipe? I know mine doesn't call for sour milk. I think mine rips off a cake mix. (Perhaps I'm just that lazy. You were always the "make it from scratch" gourmet. I'm the "open the box" slacker.)

My recipe for the Gobs is a little different from yours. Handed down from my family in Johnstown, Pa. and our German heritage.
I moved away from home many years ago but brought some recipes with me and when I need a new one I just call family who still live in Johnstown. A few fall favorites are Chocolate Gobs, Pumpkin Gobs, Chocolate and Pumpkin Rolls and Pumpkin Cookies.
I also make mine totally from scratch. I like the full homemade taste and enjoy baking and cooking.

I too, enjoy cooking and baking from scratch and just made a batch of homemade Gobs. We also made some homemade pumpkin cookies which is another handed down recipe from my family.
My recipe is a little different from yours. It is from my family in Johnstown, Pa. where I grew up and many family still live. My ancestors were of German decent and my family love cooking and baking.
My recipe is totally from scratch no box mixes and I too use sour milk in mine but I noticed that your recipe calls for hot water where mine calls for hot coffee. Really gives it a great taste.

Marnee - if I'm feeling lazy (which is more often recently with the second kiddo around), I make gob cake from a cake mix. One big gob is much easier to make than lots of small gobs. :)

Cindy - hello fellow western Pennsylvania-ite! Coffee in the gobs sounds wonderful. My recipe might have been altered by my non-coffee-loving mother (gasp!). I'll have to try it with the coffee the next time that I make them. Pumpkin rolls are another fall favorite that I'll have to make soon. Yum!

Aubree,
I may be like you mom in that I do not like the taste of coffee even though I don't mind the smell. I prefer tea and hot chocolate :)
You don't really taste the coffee in the gobs, but it does seem to enhance the flavor.
The pumpkin cookies are a big favorite with all of my family and relatives and has become a big hit with people where I now live in Ky. My daughter just called and asked if she could come over to make some for her bosses for bosses week next week because they liked them so much from last year.
Have fun baking! :)

Do any of the recipes that have been posted match the original gob with the sailor boy on them? That cake and the filling had its own special taste.
Jake Trexel

Do any of the recipes that have been posted match the taste of the yellow filling and cake of the Sailor Boy gobs I was raised with?

Hi Jake! I'm sad to say that I've never had one of the gobs with the Sailor Boy on them. Do they still sell them? Maybe I could have my brother send me one; he still lives in Altoona. The only commercial brand of gobs I've had are from Sheetz, and I think they are subpar to the homemade version. I've had lots of trouble finding specialties from western PA I've been transplanted in Jacksonville, FL. Another yummy treat I miss...Mallo Cups! They have them here, but they're hard to find. And in Altoona, you can go to the factory and buy their seconds for CHEAP. Probably good for my waistline that I'm so far away. :)

Hi Aubree
I forgot about Mailo Cups, they were great. Do you miss living back home as bad as me? Have you been gone long from home like me? I miss it every day of my life. I miss Ripples and Coney Island and Tops. The south as far as I am concerned has no good food at all.

Other Great Blogs (some not even about food!)